Looking for a fun, educational way to get some exercise--while practicing social distancing?

It is easy to accomplish all of this in the Kenneth M. Dubuque state Forest, or as most people call it, the Hawley State Forest--and it is easy to keep social distance in its 7,882 acres with over 35 miles of trails. Hawley was once a bustling town, but now only has a little over 300 people. It is a great place to explore our New England woods and see relics of Old New England.

For this walk, bike, ski, or snowmobile ride, park beside the East Hawley Fire Station on Plainfield Road (East Hawley Road) near the intersection of Ashfield Road (see map). You can see the church from there. (Did you know that to be an incorporated town in early Massachusetts, you had to have a church?) If you walk in the trail you will soon come to the charcoal kiln. This is a fabulous stone structure as you can see in the photos. It is a great place to take children to learn about how charcoal was made. Why was it so important to have a charcoal kiln? What was charcoal used for? Massachusetts has 80% more forests now than it was a century ago. By 1876, much of the timber had already been cut.

If you want to keep hiking, continue up Kiln Road. You will cross at the base of a small beaver pond. (Beavers were were highly sought after by early trappers for their pelts and were nearly all killed by 1876. They started returning to Massachusetts in the 1920s and were also reintroduced. This is a whole other study you can do with your children.) When you get to the intersection of with Penobscot Road, turn left and shortly on the right you will find and old foundation. BE CAREFUL OF THE OLD WELL near the northeast corner of the foundation between two maples. What is the big structure in the middle of the foundation? It is the base of the old central chimney.

Most early New England houses had a big chimney with a big fireplace for cooking, a beehive oven, and two additional fireplaces in the “fancy parlor” and the regular parlor. Sometimes they contained a smoking chamber too. Fancy houses often had fireplaces in the upstairs bedrooms. This how they heated the house. The fire going all day would heat that central core of stone or brick, which would help the house retain some heat over night. I have read that the average indoor temperature in winter was 45 °F. How long would you estimate since a house had been in this spot from the size of the trees growing in the basement? 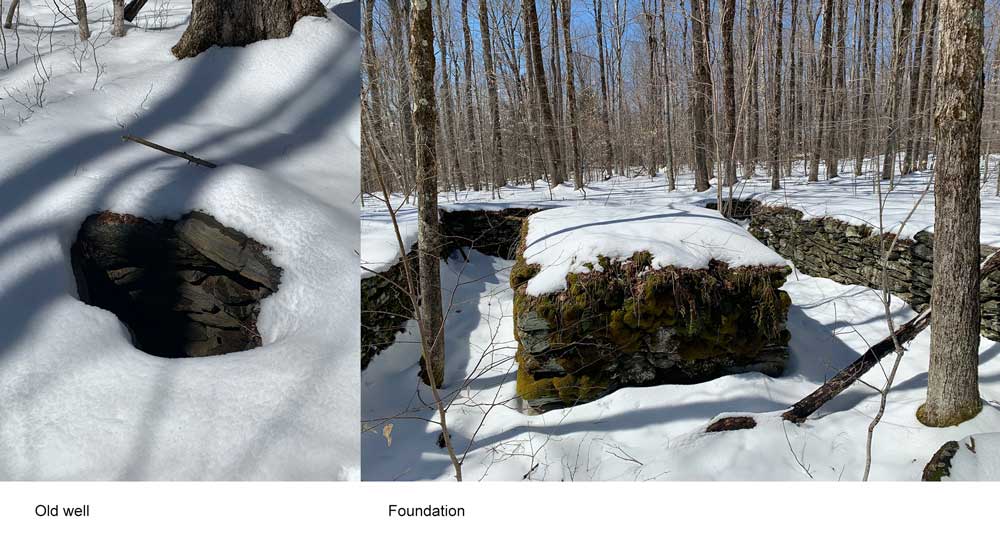 If you want to keep going, you can head to another old foundation near the corner of South Road and Middle Road on the Periwinkle Trail. It is about another mile farther. (I did an entire loop on my cross country skis, catching the last of the snow which is about 6 miles.) Why is it called the Periwinkle Trail? This is easy to answer in the spring; Myrtle or periwinkle plus day lilies and old lilacs are plants that tend to be long lived and if you see them in the woods there is a good chance there is a foundation nearby. Be very careful near old lilacs because there were commonly planted near wells. How does this foundation differ from the other? Which of the two foundations do you think is better sited and why? Other than the foundation pictured here there is more cool historic stuff up this trail but it is not a good ski trail, so I did not go there.

I then continued down South Road so I could go around the block, down Middle Road, which has a lovely large beaver meadow beside it as you approach Hunt Road. It is one of many in the Hawley State Forest. There are also several old dams. The one pictured here is near the corner of Hunt Rd and Penobscot Rd. I hope to go to the other side of the Hawley State Forest near Hallockville Pond off of West Hawley Road for my next post on water power. Hawley has a very high altitude, hence lots of snow, but I doubt I’ll be on skis again this season. I took these photos on March 26th. 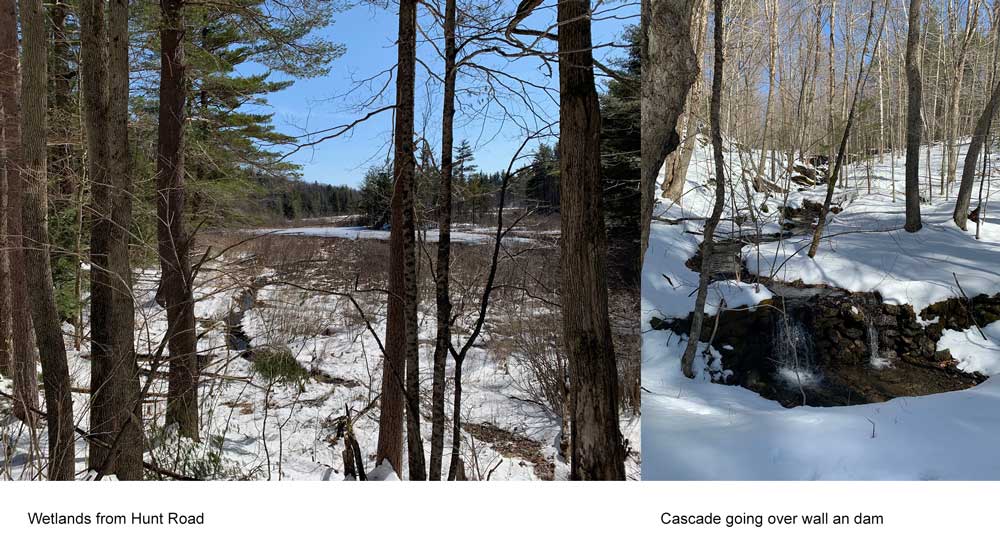 If you're interested in further reading on life in early New England, I recommend Diary of an Early American Boy by Eric Sloane. It's great reading for readers in middle school and up!

Carla Ness of Delap Real Estate and her dog, Jack. (photo taken earlier in the season)

Due to the spread of Covid-19, Delap Real Estate has cancelled office hours until further notice. During this time, our agents will be working remotely and will continue to provide a high level of service to our clients while staying committed to everyone’s health and safety. We have provided some basic information below, and encourage you to contact us with any questions. Our agents’ phone numbers and email addresses are available here.

In accordance with state and federal guidelines limiting group gatherings, we are not scheduling open houses at this time. 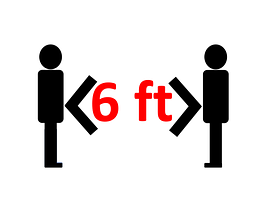 We are still showing properties both virtually (through FaceTime/video tours) and in person. For in-person showings, our agents will wash/sanitize their hands before and after entering the property, keep at least 6 feet of distance from others, and will ask prospective buyers do the same. Agents will open bathroom, closet, and other doors in advance, so that prospective buyers not need to touch anything as they move through the space.

We will be happy to “meet” with you by video or phone conference, and spend as much time as necessary to develop a plan to find your dream home—or get your property on the market. We are also available to meet in person, using the same safety measures described above for showings.

Whether you are in the middle of a closing, just embarking on a house search, or looking to put your property on the market, we know that many questions are likely to arise. Please feel free to contact us about any aspect of your current or future real estate endeavors. We will do our best to supply the information and resources you need to move forward now or formulate a plan for later.

As of today, everyone at Delap is healthy. We will continue to exercise an abundance of caution to preserve the health of our agents, clients, and the community at large. We are sending good wishes to all of you and your families in this difficult time. Please stay safe—and practice as much social distancing as you possibly can. We will do the same!